Since a rash on the skin is an indispensable symptom of roseola, parents often turn to not only a pediatrician, but also a dermatologist.

Baby roseola has many names: sudden exanthema, three-day fever, pseudo-rubella. In many cases, it is not diagnosed as a separate disease, when the temperature rises, an acute respiratory viral infection is diagnosed, the rash is attributed to an allergy to medications taken during the illness.

What is baby roseola? 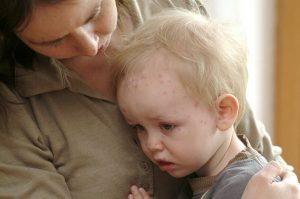 This infection is transmitted presumably by airborne droplets, the incubation period is 9-12 days. Laboratory confirmation of the diagnosis is not required and, as a rule, no tests are performed. Usually, children from 6 months to 3 years old are sick, mainly in the spring-autumn period.

What is the causative agent of this disease?

Most often, roseola is caused by the human herpes virus of the 6th type, less often of the 7th type. Herpes virus 6 (HHV-6) is very widespread, babies have antibodies from the mother at birth that protect it. Their level is significantly reduced by 4 months, and the baby becomes susceptible to infection. After 2 years, the immune system can already quite successfully cope with the virus, preventing the development of an acute illness. But in the interval, the body of children is most vulnerable, the peak incidence occurs at 6-12 months.

There is no specific prophylaxis for roseola, of the general measures that reduce the risk of the disease, one can note the regular ventilation of the rooms where the child is, restrictions on close bodily contact with adults (you should not kiss a small child on the lips, nose, lick spoons and nipples, and so on) …

After the illness, persistent immunity is developed, cases of re-infection are quite rare, but sometimes they occur. After 4 years, almost all examined children have antibodies to this virus.

What are the characteristic signs of the disease?

A rise in temperature to 38 ° C-40 ° C without respiratory symptoms (runny nose, cough, sore throat) and rashes. An increase in temperature is the body’s response to the presence of a virus in the blood. On average, the temperature lasts 3 days.
Rash of small pale pink spots mainly on the neck and trunk, in smaller quantities on the face and extremities, 1-2 days after the cessation of the fever. A pale rim can often be seen around the elements of the rash.
The rash is non-itchy and will go away on its own within a few days or weeks.
How is roseola different from rubella?

With rubella, the rash appears simultaneously with the temperature, is located mainly on the limbs, and is slightly different in appearance. Also, rubella is not characterized by such a sharp and high rise in temperature.

In the overwhelming majority of cases, the body copes independently and without consequences. A high fever with sudden exanthema can cause febrile seizures. As a rule, they are not dangerous, pass without consequences for the child and are not associated with damage to the nervous system or brain. But, if this happened for the first time, the child should be examined by a neurologist.

Sometimes there are accompanying symptoms in the form of inflammation in the nasopharynx and swollen lymph nodes. It is extremely rare, with a corresponding predisposition, possible neurological complications of the disease: encephalitis, meningitis. 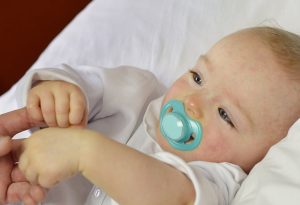 How is roseola treated?

The child should be examined by a pediatrician, since a high temperature can be not only with roseola, but also with other infectious diseases that require treatment, for example, otitis media, urinary tract infections.

There is no specific treatment for the roseola virus, so the treatment is symptomatic: antipyretics at high temperatures to relieve the child’s condition. While the temperature is holding, it is important to ensure that the child is consuming enough fluids. If the child refuses to eat, it is not necessary to force feed, as soon as the condition improves, the appetite will return.

When a rash https://en.wikipedia.org/wiki/Rash appears, you do not need to lubricate it with something or take antiallergic drugs. The spots go away on their own without leaving traces, there may be slight peeling of the skin, which also goes away without treatment. The child can be bathed during this period. After bathing, there may be an increase in the brightness of the rash due to the flow of blood to the skin, this is a temporary phenomenon that does not worsen the course of the disease.

Antiviral treatment is carried out in severe cases of the disease, as a rule, in children with reduced immunity. When treating patients with immunodeficiency, it is necessary to consult a pediatric infectious disease specialist.