Regardless of the social status of the family and the sanitary and hygienic situation in the house, from birth to 5 years, almost all children suffer from rotavirus gastroenteritis. According to statistics, annually in the world this infection is transmitted by more than 137 million people, about a quarter of whom are hospitalized. Unfortunately, there are cases of death, including in children. Rotavirus gastroenteritis is most severe in children when they first encounter the virus, which usually occurs between the ages of 6 and 18 months. In bottle-fed babies, the risk of infection and a more severe course is slightly higher. 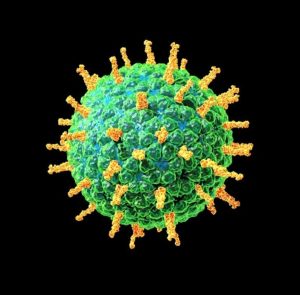 Adults are also susceptible to this infection. During life, you can become infected repeatedly, since the natural immunity to the virus is type-specific (it protects only against a specific type of rotavirus and does not protect against others). With repeated contact with the virus, as a rule, the disease is less pronounced, but the person is contagious and can spread the infection.

So what exactly is rotavirus? There is an opinion that the rotavirus got its name due to the fact that it enters the human body through the mouth, this is not true, the virus is so called, because outwardly in its structure it resembles a wheel (from Latin – rota), hence the name. There are several types that differ slightly from each other in structure, but cause the same clinical picture of the disease.

The route of transmission of this infection is fecal-oral, that is, to put it simply, it is “dirty hands disease”. The virus is very contagious, only 10 particles of the virus are enough to get sick. Rotavirus persists for a long time on any surfaces, even with careful cleaning. Therefore, very often several family members, including adults, are ill with this infection at the same time, there are outbreaks in children’s groups. It is worth noting that you can only get infected from a sick person; pets do not get sick with “human” rotaviruses.

The incubation period for rotavirus infection ranges from several hours to 5-7 days. It is characterized by general malaise, weakness, refusal to eat, fever and symptoms of gastrointestinal tract damage (frequent watery loose stools, vomiting, abdominal pain). At the first signs of illness, you must seek medical help! After examining the child, the doctor will assess his condition, the need for hospitalization, prescribe examination and treatment.

To diagnose an infection, a study of feces for rotavirus by PCR (polymerase chain reaction) and ELISA (enzyme-linked immunosorbent assay) is used, the result is usually ready in 1-2 days. But treatment must be started at the first symptoms of the disease, without waiting for the results. Therapy is carried out according to symptoms, and practically does not depend on the test results. Tests are prescribed in order to make sure that this is a rotavirus infection and in case of complications, so that doctors understand what exactly they are dealing with.

For the treatment of children who do not need hospitalization and stay at home under the supervision of a pediatrician, so-called pathogenetic therapy is used, aimed at compensating for the loss of fluid that the child loses during an illness with loose stools and vomit.

The most important rule for a mother with rotavirus is to solder the baby, several sips every 5-10 minutes. If the child refuses, then drink him from a spoon or from a syringe (after removing the needle). Avoid giving your child a large amount of fluids to drink at one time, even if they are very thirsty, as this can cause vomiting. It is necessary to be patient and constantly, in spite of the protests, drink-drink-drink. It is the desoldering that helps to avoid dehydration and hospitalization.

In addition to water, special saline solutions from the pharmacy are used to solder the child, containing salts that are lost by the body during illness (Hydrovit, Humana, Electrolyte, Gastrolit, Regidron, etc.). In the absence of special drugs, you can use a homemade solution until you purchase them. You can prepare it by taking a liter of boiled water, adding 1-2 tablespoons of sugar (without a slide), half a teaspoon of table salt and one third of a teaspoon of baking soda. The finished solution can be stored for no more than a day. Do not solder children with milk, juices, fruit drinks, vegetable broths, carbonated drinks.

The second important component of treatment for rotavirus infection is diet therapy. At the time of an acute illness and 2-3 weeks after it, the child is prescribed a sparing diet, with the exception of dairy products, juices, raw fruits and vegetables. The child should eat more often than usual, in small portions. Food should be as gentle as possible for the stomach – not spicy, not greasy, not hot, not fried.

In young children who are breastfed or artificially fed, the question of further feeding is decided on an individual basis with a pediatrician. With continued frequent loose stools, in children on artificial feeding, it is possible to temporarily switch to a mixture with a low lactose content (lactose-free, low-lactose, etc.). In infants, the issue of partial replacement of breast milk with a mixture with a low lactose content or the addition of special enzymes to breast milk that help the milk to be absorbed in the baby’s intestines (lactase enzyme preparations) are being resolved.

Also in therapy, such groups of drugs are used as: enterosorbents (Smecta, Filtrum-sti, Enterosgel, etc.), probiotics (Enterol, Linex, Bifiform, Acipol, etc.), prebiotics (Hilak-forte, Duphalac, etc.), enzymes (Creon 10000, Mezim-forte, Pancreatin). You should not give the child these drugs on their own, you need to consult a doctor, as you need to understand the advisability of taking them at different periods of the disease.

According to indications, antiviral and immunomodulatory therapy can be carried out. The decision on the appointment of drugs in this group is made only by a doctor.

It is worth dwelling on antibiotic therapy separately. Antibiotic therapy for uncomplicated rotavirus infection is not performed. But in some cases, doctors still prescribe antibiotics. And it’s not just a matter of habit. This is due to the fact that acute intestinal infections are not only viral, but also bacterial in nature (E. coli, Salmonella, Yersinia and some others). And it is not always possible to determine with 100% accuracy by the symptoms what caused the symptoms: a viral infection, a toxic infection or a bacterial one. There are also mixed causes and an atypical course of the disease, so the question of prescribing antibacterial drugs remains at the discretion of the attending physician.

Very important! If the soldering of the child turned out to be ineffective and the child continues to vomit, weakness grows, he urinates less than usual (the interval is 3-4 hours), then there are direct indications for hospitalization of the baby in a hospital, where he will be prescribed infusion therapy (intravenous fluid administration).

Currently, there is a unique opportunity to protect your baby from rotavirus infection. The Rotatek® vaccine has been certified in Russia and has been successfully used abroad for several years. The vaccine protects against the five most common types of rotavirus and prevents severe forms of other types of the virus. For the full course of vaccination, it is necessary to enter 3 vaccines, the convenience of using the vaccine lies in the fact that it is presented in the form of drops for oral administration, and not in the form of a syringe for intramuscular injections. The first dose of the vaccine is at 6-12 weeks of age, then 2 more at an interval of at least 4 weeks. Revaccinations, that is, repeated injections of the vaccine after a full course of vaccination of 3 stages, is not required.

The vaccine https://en.wikipedia.org/wiki/Vaccine is intended for children from 6 weeks to 32 weeks, it is not used in adults. This is due to the fact that the first encounter with the virus and the most severe course of the disease occurs during this period. Later, after the immune system “got acquainted” with the virus, the likelihood of developing a serious illness decreases and immunoprophylaxis with a vaccine is no longer so relevant.